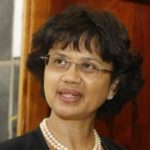 Read the full transcript of the Minister of Agriculture, Forestry and Fisheries’ 2012 Budget Vote Speech delivered on 3 May 2012 in the National Assembly here.

Our struggle icon and the father of our nation, Nelson Mandela, once said that: “We do not want freedom without bread, nor do we want bread without freedom. We must provide for all the fundamental rights and freedoms associated with a democratic society.” This means that we can neither divorce freedom from food, nor food from freedom. I thus implore all of us to re-commit ourselves to “Working together for food security.” This is the theme of today’s budget speech.

Our draft Food Security policy and Zero Hunger strategy promotes equity and prioritises the eradication of poverty and reduction of inequality amongst the masses of our people. We believe that the goal of a developmental state can only be reached when our people gain access to food within an economy that promotes sustainable livelihoods.

The ‘right to food’ as enshrined in our Constitution and the Freedom Charter, demands a rethinking of our past approaches to food security.

We can produce enough food, but whether the poor can afford the food on the shelves largely determines South Africa’s food security status as a country. High food prices, food price volatility and food price hikes will be the greatest challenge to our nation over the next few years. This will further be exacerbated by high fuel and high energy prices.

To curb these challenges, small holder farmers will be assisted with the provision of livestock, tractors, implements, seeds and fertilizers. One family, one vegetable garden should be the mantra of each and every family in South Africa.

We will increase agro-processing investments as a means of reinvigorating specific strategic value chains such as soya beans, rooibos, beverages, fruit and vegetables, and forestry. R50 million will be allocated for the promotion of local agro-processing businesses. An equitable food security economy will improve access to markets for especially small holder farmers. It is important that we seek to increase the extent to which we export processed rather than unprocessed agricultural products. The entire value chain of Biofuels will also be a priority.

This is definitely a reflection of confidence in our agricultural sector, since job growth should be measured within the context of a sector which has been shedding jobs since the 1970s. We must continue building on this trend through employment on commercial and smallholder farms. We are cautiously optimistic when we say that we have curbed job losses in agriculture. Our community works programmes; working for fire, working for water and working for fisheries will increase our capacity to create jobs.

Notwithstanding the ongoing legal processes around Wallmart, which government has taken in order to protect our agro-processing industries and jobs, we are also working with the company to ensure that opportunities are maximised by their entry to the market. To this end we will be leading a delegation of farmers to Costa Rica to learn from Wallmart’s “direct-to-farm” procurement programme, which focuses on market access for smallholder farmers.

South Africa’s trade of both primary and processed agricultural products have grown from R10 billion exports in 1996 to about R48 billion in 2011. Our wine exports are soaring notwithstanding the recent global economic slowdown.

We are now exporting three times more wine than we did a decade ago. Exports of fish and fish products have rapidly expanded in China and Cameroon. Timber and forestry products are gaining ground in China and Indonesia. We are exporting more and more maize to Zimbabwe.

Despite our success story as a country which is a net exporter of food, international trade has yet to include more black farmers in the equation. The Branch: Economic Development, Trade and Marketing is allocated about R200 million to support international trade, marketing, agroprocessing and cooperative development.

Our department is positioning itself to participate in a meaningful way in BRICS. The department will open offices in Russia, India, and Brazil, in addition to the one which is already operating in China.

I wish to specifically thank all the stakeholders who made it possible for us to have agriculture included in the climate change text at the Conference of the Parties (CoP17). South Africa made three proposals for inclusion into the final text, which relate to adaptation issues, mitigation actions in the sector, and a program of work under Reduction in Emissions, De-forestation and Degradation (REDD+) which considers agriculture as one of the key drivers of deforestation.

The Department has gazetted the AgriBEE Charter and the Draft Sector Codes for public comment. I would like to encourage all South Africans to make their inputs to the AgriBEE process by the 26th of May 2012.

The restructuring of the former Branch of Marine and Coastal Management (MCM) corresponds with international trends which recognize fisheries as an economic activity rather than a purely environmental or biodiversity matter. Government has also expanded the mandate for fisheries management through the inclusion of fresh water and inland fisheries, as well as aquaculture, to our existing responsibilities.

We will gradually establish offices of the Fisheries branch in other coastal and inland provinces. These are economic decisions which contribute to employment creation and poverty alleviation!

The Small Scale Fisheries Policy will be finalized and implemented this year. The policy seeks to address imbalances of the past, and ensure that small scale fishers are accommodated and properly managed. For the first time fishing rights will be allocated on a group rather than an individual basis.

The department has entered into a Service Level Agreement with the South African Navy to manage our fleet of 4 patrol vessels and 3 research vessels for a period of one year, while we consider our various options regarding the long term management of these vessels.

Regrettably, following extensive allegations of maladministration in the Fisheries Branch, and after extensive consultations with the Department of Justice and Constitutional Development and the Presidency, we will be requesting the Special Investigating Unit to look into all tenders awarded by the Branch, as a preparatory step to the Committee of Enquiry which I have previously announced.

This year we successfully hosted the 6th Session of the United Nations Food and Agriculture Organization (FAO) Committee on Fisheries Sub-Committee on Aquaculture. This sector has shown increased production at an annual average of 11,6%. The Branch: Fisheries management will get R400,0 million this year to oversee the management of our fishing industry, including R253,0 million for the Marine Living Resources Fund.

Honourable Members, the Department is the custodian of South Africa’s forest resources which covers over 40 million hectares of the country’s land surface area. The forest sector employs about 201 025 workers. It provides about 77 000 direct jobs and 30 000 indirect jobs. It provides livelihood support to 2,3 million people in our rural areas. Downstream activities in the sector employ about 52, 400 direct and indirect jobs. Another 11 000 workers are employed in miscellaneous jobs in the sector.

The Forestry and Natural Resources Management Branch of the Department will continue to support and conduct research initiatives and programmes to gain a better understanding on the processes behind climate change, vulnerability and eco-friendly agricultural practices. The Branch: Forestry and Natural Resources Management will get R1.2 billion during this financial year to manage our forests and natural resources.

Our country has been plagued by natural disasters and animal diseases. Between December 2010 and January 2011, we had devastating floods in Limpopo, Free State, North West, Gauteng, Eastern Cape and Northern Cape Provinces. We have begun the process of implementing the Flood Assistance Scheme, with its emphasis on infrastructure repairs. An amount of more than R990m has been made available through the MTEF period until 2014/15 as part of the flood assistance scheme.

Animal disease outbreaks such as Rift valley fever, Newcastle disease, avian flu, foot-and-mouth disease, African Horse Sickness and African swine fever have been serious challenges to our industry. Our department will have to improve on its capacity to deal with such disasters as they impact adversely on the rural economy. R954 million is allocated for plant and animal production, including inspection and laboratory services; R935 million for agricultural research which represents a substantial increase over the previous year’s allocation.

Our dedicated “Strategic Integrated Project” eleven on agro-logistics and rural infrastructure, as part of the Presidential Infrastructure Coordinating Commission, include plans for the following:
• Fresh produce marketing depots for smallholder farmers
• Production infrastructure for crops and animals
• The revitalisation of various irrigation schemes, including the Vaalharts-Taung irrigation scheme
• The refurbishment and upgrading of the agricultural colleges, and
• Various projects such as grain storage facilities and rehabilitated irrigation schemes in the former homelands, fencing including border fences and animal quarantine facilities at our borders.

These infrastructure projects will be implemented in a phased approach.

In addition, the Land Care allocation for the coming year is R115 million, while the Ilima/Letsema programme gets a total of R415 million.

In keeping with our theme of “Working together for food security,” we hosted our first Delivery Forum during March this year. The Delivery Forum is an ideal platform to cement stakeholder relationships in pursuit of our developmental objectives. It will emphasise strong coordination and communication to ensure that things get done. Improving the flow of information and ideas between government and the private sector will enhance our ability to identify new and better opportunities for investment.

We thank the agriculture, forestry and fisheries sector in general and each individual in particular, for their selfless support. Our sector has become a significant role-player on the African continent. Our task would be but half done if we do not take up the cudgels to help South Africa become a country with total food security for all.

Our country has to play its rightful role in creating prosperity, jobs and equality for its people.

Your role, colleagues and friends, is to once again look deep into your work, and your hearts, and ask what more you can do to contribute to making South Africa a better country for all. Together, we can do more. Together, we can work towards food security for all.

Honourable members, the total budget allocated to the department for this financial year is R5.8 billion. We would like this house to endorse this budget.

In conclusion Speaker, I wish to thank the Deputy Minister, the MECs, the Director-General and the department, our SOEs and the staff of the Ministry for their diligence and the commitment which they displayed during the past year in executing the mandate of the department.